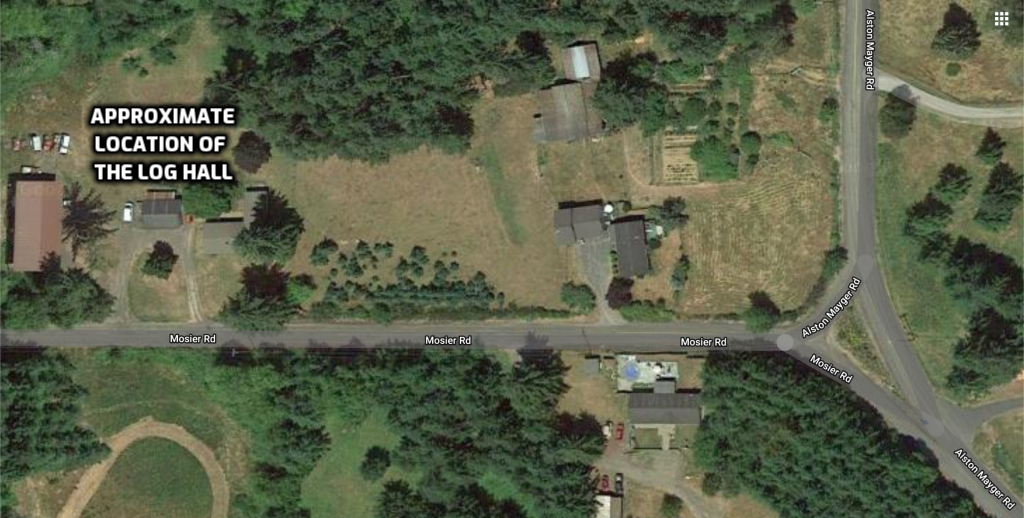 Photo taken from Google Maps October 19, 2018.
Per Larry Humphrey the Log Hall began to have dances in 1936. It continued to have dances up until about 1951, and then after it was primarily used for community affairs. On January 20, 1953 an explosion destroyed the kitchen on one end of the building. Rumors circulated that vandals had placed dynamite into the kitchen's stove. In a meeting on February 14 the Delena Neighborhood Circle decided to tear away the damaged end and remodel the structure making it into a smaller building. It is not known if they actually followed through with this plan or just simply tore the whole place down. A dozen years later there was hardly any trace of the building left.
Click on images to enlarge! 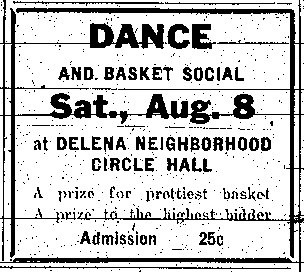 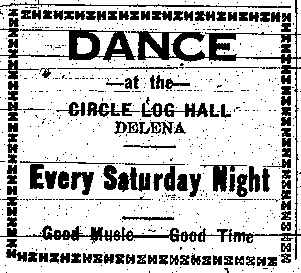 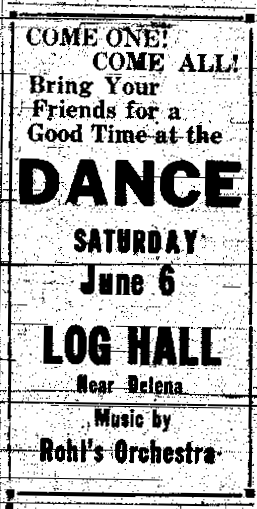 In the February 19, 1953 issue of the Rainier Review an article described the damage to Log Hall that was caused by an explosion that happened on January 20, 1953. Also the decision to tear away the area that was damaged and to remodel the structure into a smaller building that would continue to be used for community affairs.

Lynn Hadlock This is what I remember about the log hall. It belonged to a community group called the Neighborhood Circle. They held card parties there and dinners, Christmas parties and the Women’s Home Extention , which consisted of ladies in the neighborhood, would meet there. Sometimes an extention leader from St. Helens, I believe, would come & teach them different crafts & sewing & cooking tips. I would always go with Mom because my Grandma also went so there was no one to watch me. One thing I particularly remember was a footstool they made. It was all upholstered but the insides were big juice cans and padding. We used that for years. We also always had a Christmas party with food & gifts & music for dancing. And of course there were the dances that got quite wild but I’m not sure they involved the Neighborhood Circle yet. After it was dynamited my grandparents, Earl & Jennie Watson bought it & Grandpa salvaged what he could. Later they sold the property to Ridderbushes who built the house there. It’s on Mosier Rd. right past Knoxes. I don’t know who else you would ask as I am kinda the old timer of Delena now.

Marjorie (Lepin) Clark was told that if she went to dance at the Log Hall to always stay inside, since young men often settled their differences out in the parking lot.

Nelson Lepin remembered that at the beginning of WWII there was a guard post manned by two soldiers at the Oregon side of the Longview Rainier bridge. He and a friend, out for a drive, stopped to visit with the soldiers and mentioned that they were going to a dance later at the Log Hall. They tried to interest the soldiers to come along, but it would not be possible, since they'll both still be on duty. That evening, on the way to the Log Hall, they again stopped at the guard post. The temptation was too great for one of the soldiers and he jumped into their car with his rifle and asked his buddy to cover for him. Nelson remembers that he and his friend marched back and forth in the parking lot with the soldier's rifle, pretending to be in the army, while the soldier was inside. Later they returned the soldier to his post, no one the wiser.

From Larry Humphrey: The Log Hall on Mosier Road was built in 1936 and as a boy I was riding with my dad to my brother's home and we together seen that the end of the Log Hall was in shambles and boards all over the grounds. We later learned that it had been dynamited by an unknown source. They remodeled it and left the end off, which was the kitchen and had no more dances in it after that.

Red Coffman: Went out there the next day, lot of stuff all over, it was said 3 sticks in the cook stove from the horses mouth. ANN JONES and her WESTERN SWEETHARTS, an all-woman band, played there a lot and also ARKIE AND HIS JOLLY COWBOYS.

Gene Guisinger: I just remember the floor was all that was left when Kim Lenzner and I were roaming the area in the Late 50's

Doug Knox: My parents have owned the property since about 1962 (?). I remember finding a lot of old bottles and glass when I was a kid, but no signs of a building. But that would be in the 1970's.

Nancy Knox: The house on that property was build in about 1966-67. No house across the street but up the road on the left and right . No sign of a building behind where that house is now. We own the property behind there.

Return to top
Contact me at Clarkmikew@aol.com for any questions